The mobile Internet has come of age. In 2009, one in four Americans used a mobile device to access the Internet every month. That’s roughly 77 million people looking to discover new things, stay connected, and keep informed—all on the go.

Globally, the numbers are even more impressive. There are four times as many mobile phones as PCs in the world. Asia has been a leader for some time; for instance, twice as many Indonesians search on a mobile than a PC.

With millions of mobile searches every day, here are some of the biggest topics people tracked in 2009.

Celebrity Pomp and Circumstance
June 25 redefined the mobile landscape. As tweets and rumors spread across the Web, mobile devices buzzed with texts, email, and searches for Michael Jackson and news of his death—more searches, in half a day, than any other event. In June, mobile users searched for Michael 550 percent more than they had in May. As news (and scandal) emerged throughout the summer and fall, mobile users continued to look for MJ’s siblings, the “Thriller” video and lyrics, and details on his final performance in the movie “This Is It.”

Other stars were boosted by gossip, rumor, and innuendo. Pop chanteuse Rihanna‘s very public problems with ex-boyfriend Chris Brown catapulted her onto the mobile charts, with searches on her name increasing 6,000 percent in February. Lady Gaga, too, had a brush with the gossip mill about her DNA makeup, which increased searches on her name exponentially (it’s true—we’re so nerdy, we graphed the trend). 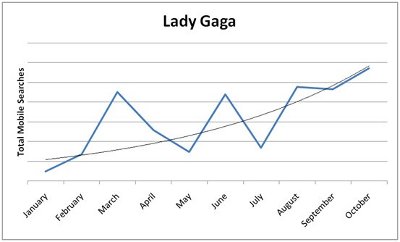 From the silver screen to the touch screen, starlet Megan Fox was a mobile search sensation, dominating mobile searches as “Transformers: Revenge of the Fallen” climbed the summer movie charts. Other film-related spikes included “Twilight Saga: New Moon” and “Paranormal Activity.” Movies in general are popular, especially as people check out show times, trailers, reviews, and venues on weekends.

Gamer’s Paradise
Remember the humble black-and-white cell, preloaded with a few ringtones and a game or two? It’s almost hard to imagine today, with users downloading feature-rich mobile games, apps (like Flickr, Fantasy Football, Yahoo! Finance), ringtones, and other consumables with a few taps on a multicolor screen. Once-solitary activities became social as users played games with friends, created their own ringtones, and used Yahoo! Messenger and Mail to stay connected, dynamically expanding the social communication options beyond SMS. Tetris, Bubble Bash, and Guitar Hero topped the list of games searched, while Soulja Boy‘s “Kiss Me Through the Phone” and Lady Gaga’s “Poker Face” were hot ringtone searches. Of course, it was the iPhone that many coveted; searches for “iPhone 3GS” and “iPod Touch” dominated device-specific searches.

In the Pigskin Zone
The NFL took the game as far as sports searches were concerned, though NBA and NASCAR searches were also very popular. Specific events, including the NBA draft, NBA finals, bowl games, and the Super Bowl, all drove search spikes. On a daily basis, sports enthusiasts track their favorite teams, game scores, and fantasy leagues. 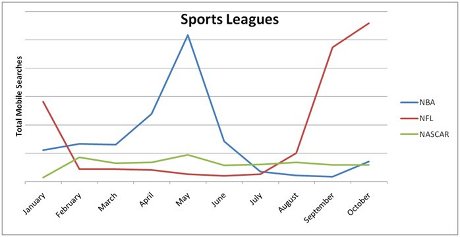 And for the tops…