When Arizona governor Jan Brewer signed America’s toughest immigration law in April, she and her backers justified SB1070 on the grounds of rising crime, perpetrated by illegal immigrants. The bill also sprang from a greater concern in Arizona, shared by other states: Illegal immigrants take jobs away from citizens. SB1070, which had opponents within the Arizona police force as well as among rights activists across the nation, now faces a federal challenge before the 9th Circuit Court of Appeals.

The real problem for the U.S.’ s economic recovery may indeed be migration, but the domestic kind. Historically, workers go where opportunities lie: The Dust Bowl migration involved scores of families leaving Arkansas, Oklahoma, and Texas for the more fertile grounds of California’s San Joaquin Valley. During this time, Southern blacks headed north, and World War II spurred a greater move to Pacific coastal cities to work in defense industries. These days, homeowners are shackled to houses that have plunged in value, so they often can’t afford to move, even for a desperately needed job.

The sunbelt migration
In the latest boom years, people flocked to “sunbelt” cities in the southwest and southeast, where the weather was warm and the housing was cheap. Arizona and Nevada duked it out for the status of fastest-growing state — between 2000 and 2008, Nevada’s population grew 30.1%, Arizona’s by 26.7%. And the real estate bubble inflated, as the median price of a home in Miami swelled from $110,000 in 2000 to $290,000 in 2007, according to MDA DataQuick — a 163.6% appreciation. In Las Vegas and Phoenix, median home prices increased by 127.7% and 103.9%, respectively, between 2000 and 2006. With interest rates low, many homeowners took out loans against the equity of their homes, adding to their debt burden when home prices plummeted starting in 2007, some losing more than half their value. 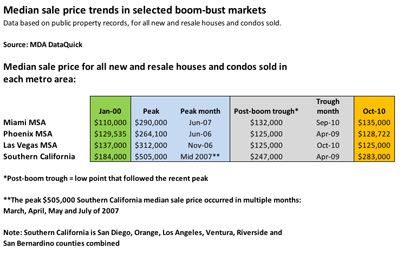 Arizona was one of the hardest-hit states following the real-estate bubble burst, and economists in the state believe the recession lasted longer there. Nevada, California, and Florida, the other real-estate boom states, joined it as the nation’s weakest economies after the bust. The limited flexibility of American homeowners to pick up and move is an obstacle on the nation’s long journey back to economic health.

Fear Factor: SB1070
After SB1070 passed, a nationwide television ad featured a man saying, “The president is doing next to nothing about 8 million illegal foreign workers while millions of Americans are jobless. I know. I’m one of them.” Lamar Smith, a Republican congressman from Texas, has said, “We could cut unemployment in half simply by reclaiming the jobs taken by illegal workers.” Factcheck.org debunks that claim, explaining that most economists believe that illegal immigrants actually help create jobs. Yet polls have shown that Americans affected by the economic downturn are more likely to express anti-immigrant views.

Arizona governor Jan Brewer has retreated from her more controversial claims of beheadings in the desert border between the U.S. and Mexico. However, the Republican has stuck by her message that Arizona is in danger because of illegal immigration, and the issue continues to pull in support and donations: The government website soliciting donations for the state’s legal case, Keep AZ Safe, has so far collected more than $1.5 million.

Declining alien populations
Looking back at the recession years, the Pew Hispanic Center reported this fall that illegal immigration to the U.S. tumbled 22% from 2007 to 2009.  Arizona was one of the states that saw the largest decline in illegal immigration, Pew researchers found. As for violent crime, federal statistics show that crime also has been falling in Arizona for the last few years. Even as drug-cartel violence washes across Mexico, the FBI says it has yet to spill over into the U.S.

Economic scapegoating isn’t new. During the Great Depression, states began arresting and deporting Mexicans, many of whom were in the country legally, and the Mexican population of the U.S. dropped by 41%. Still, if the root cause of dissatisfaction with illegal immigrants is economic, that sentiment may not be reversed soon. An upcoming Supreme Court ruling on another Arizona immigration law may have a bearing on the “papers, please” law. The 2007 law mandating that employers check up on their employees’ immigration status hinges on whether the state has the right to regulate immigration in place of the federal government, an issue that also applies to SB-1070.

But the Arizona effect is spreading. With gains made by tough-on-immigration Republicans in November’s elections, dozens of states, including Georgia, Mississippi, and Oklahoma, are reportedly considering Arizona-style legislation, which could turn out to be a headache for the federal government. There have even been calls to overturn the 14th Amendment right of automatic citizenship for children of illegal immigrants born in the U.S. That movement is being spearheaded by Arizona.