Defending the Patient Protection and Affordable Care Act—“Obamacare” to detractors—may rank as the most high-profile case on the Supreme Court docket this year.

The hearing lasted just three days, long enough to combust a solicitor general’s reputation, reintroduce  “individual mandate” to the vernacular, and get people wondering about the link between interstate commerce and broccoli. A judicial decision could come in as little as 48 hours, but wouldn’t be announced until late June, which stokes another debate: whether this will or will not affect the 2012 presidential race.

Supreme Court justices under scrutiny: Pundits thought the opinions would fall along the usually party lines, with Justice Antonin Scalia leading the offense and Ruth Ginsburg taking the defense. That didn’t mean there wouldn’t be drama: Many wondered if Elena Kagan (a former solicitor general) or Clarence Thomas (whose wife has been lobbying against the act) would recuse themselves. Online, the heaviest scrutiny (at least in searches on Yahoo!) landed mostly on the so-called swing justice, Anthony Kennedy, followed by Ginsburg (the “liberal jurist”), Kagan, and Scalia. 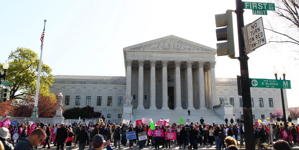 Individual mandate: To absurdly oversimplify it, the sticking point of individual mandate—can the people be required to purchase health insurance—seems to rest on the limiting principle concept. If the justices kill the individual mandate, observers seem to think the entire act will fall. Day three, though, focused on how the law could stand without this mandate.  As Justice Ginsburg put it, “the decision was between a ‘wrecking operation versus a salvage job.'”

Interestingly, while individual mandate has garnered fierce opposition from Republicans, Kaiser Health News pointed out in 2010 that the Patient Protection and Affordable Act bears many similarities to the Health Equity and Access Reform Today Act of 1993—a Republican proposal made as a counter-argument to what had been dubbed “Hillarycare” back in the day (thereby showing how political nicknames rarely change). In an interview with the bill’s co-sponsor, former Minnesota Republican Senator Dave Durenberger:

A mandate that individuals buy insurance, subsidies for the poor to buy insurance and the requirement that insurers offer a standard benefits package and refrain from discriminating based on pre-existing conditions were all in the 1993 GOP bill

What has changed since 1993? Health care is more expensive and, Durenberger stated, “The main thing that’s changed is the definition of a Republican.”

Broccoli brouhaha: The individual mandate boiled down to a veggie, at least in judicial rhetoric. In the now-infamous apocalyptic broccoli scenario, Justice Scalia asked what would stop the government from forcing people to buy broccoli or funeral coverage for their own good. Bloomberg pointed out that broccoli reared its cruciferous head eight times during arguments. The vegetable was also metaphorically brandished in the U.S. district level and evoked by Rush Limbaugh. “The justices and lawyers yesterday also used bologna, bread, cows, wheat, dairy, farms, geese, meat, milk and soup in making arguments,” Bloomberg noted. NPR also felt broccoli had to be fairly represented when All Things Considered interviewed a grower/shipper.

The solicitor general scapegoat?: Now we come to Donald Verrilli, the luckless solicitor general who had to defend the “blockbuster.” Rough start, spluttering, rambling, unusually nervous—these are just a few adjectives describing the current solicitor general’s opening argument that was plagued by a few coughs and a water break.

The Lookout rounded up the Tuesday morning quarterbacking, and The Signal peeked at the Twittersphere’s reaction to Verrilli. The odds weren’t good: The negative to positive ratio ran 4 to 1. Mother Jones ran a headline worthy of the Patient Act’s harshest critics: “Donald Verrilli Makes the Worst Supreme Court Argument Of All Time.” Lest you think it a case of headline exaggerating the article, that post actually linked to another MoJo piece that described Verrilli’s defense as “one of the most spectacular flameouts in the history of the court.” And that history goes back a few years.

In defense of the defense. Even before the three days of oral arguments were up, White House counsel Kathryn Ruemmler released a statement vouchsafing Verrilli’s creds. According to his bio, before he joined the  Justice Department in 2009, he participated in more than 100 Supreme Court cases in private practice, argued 12 before the justices, and clerked for Justice William Brennan. In short, he seemed more than qualified as solicitor general, whose sole job is to represent the government in federal cases. Why did he choke—this case of all cases? Only his memoir will tell.

Scrutiny into the health care bill is at its highest since its signing in March 2010. A Yahoo! Search sample from the past three years: 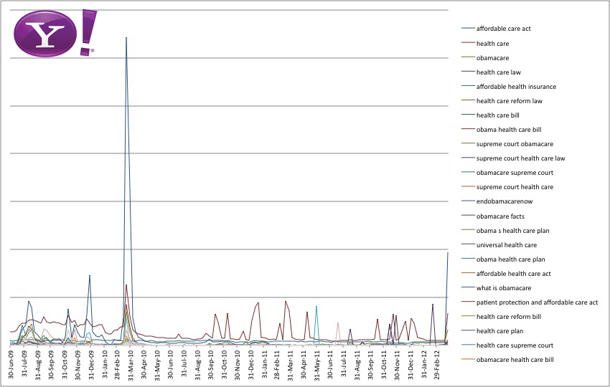