Can Motherhood Pull Kim Kardashian Out of Her Decline?

Wait — decline? Wasn’t Kim Kardashian the most-searched person in 2012 on Yahoo!? Isn’t this the happiest time of her life?

Yes, the 32-year-old reality star was the most-searched person on Yahoo! in 2012, and we’re pretty sure she’s over the moon about the arrival of her new bundle of joy, but Kardashian’s public image has been taking a beating for quite some time. Can motherhood help Kim change the world’s perception of her?

Not if she’s tempted to try and beat the paparazzi by selling her baby’s first photos to a magazine. But Kim and have reportedly said no to past offers. Still, since she plays a major role in the Kardashian empire — which has been built on their lifestyle lines and the nickelodeon peep shows of their daily lives (plus that two-part fairy-tale wedding special) —  it’s hard for cynics not to expect Brand Mom in their family’s next product rollout.

Maternal vs. Mercantile Instincts
So far, maternal instincts are overruling mercantile ones. In a recent interview with “Access Hollywood,” Kardashian put the kibosh on rumors of doing a pregnancy photo shoot or plotting with her mom to thwart West’s reported no-sales stance. “I haven’t talked about selling baby photos,” she insisted. “We’re not taking any offers on our, you know, child… I don’t really talk business things with my mom about my baby. I mean, it’s just all ridiculous.”

And on June 6, just 10 days before she gave birth, Kardashian broke her characteristic girly gushing about nail color and new hairstyles on Twitter to fume about a “scary” experience where the paparazzi were trying to snap photos of her while she was driving.

And, her pregnancy unexpectedly become part of this year’s rallying cry for women. OK, so maybe not quite in the same way as Sheryl Sandberg’s “Lean In” working-mother manifesto or the military sexual-assault scandals. But 62 years after comedienne Lucille Ball worked her condition into “I Love Lucy” and 22 years after Demi Moore flaunted her belly on Vanity Fair, the woman whose fame rested on her beauty was being ridiculed for a perfectly normal weight gain. Or, as TMZ so delicately put it when Kardashian said she’d gained only 23 pounds, “Kim Kardashian’s NOT a food-shoveling, 200-pound, fatso.”

While Kardashian herself added to the hate (before espousing eventual acceptance), she did spark a worthy conversation about the poisonous culture of “fat-shaming” when female public figures go through the most natural of events.

[Related: Burning Question: How Much Will Kim Kardashian Make Off Her Baby?]

The Gospel of Kim
Plenty still subscribe to the gospel of Kardashian. Her E! reality show, “Keeping Up With the Kardashians,” continues to have enviable ratings and her faithful fans battle trolls on every media front. They stand by the Kardashian they’ve known for years: When MySpace was king and phones buzzed mosquito ringtones, Kardashian gained “it-girl” status the old-fashioned way: She hung around Paris Hilton. Kardashian seemed positively wholesome among her fellow celebutantes and pop tarts: She didn’t wear bright orange jail jumpsuits, carry endangered species as pets, or shave her head in protest against her celebrity servitude. As a teen, when she crashed her car, she had to get a job after school to pay for the damages — and liked working so much she became a fashion entrepreneur.

In fact, by the time her private 2003 sex tape with then-boyfriend Ray J was leaked in 2007, she’d built enough of a following to withstand the scandal (one her mother used to shop around a reality show pilot). Media outlets admiringly dissected her business savvy. She held court with her fans regularly on multiple media fronts, among them her blog, Twitter, Instagram, and Keek. Two years later, she commanded enough online interest to make the Top 10 Searches on Yahoo!, alongside Michael Jackson, “Twilight,” WWE, and slipping pop princess Britney Spears. 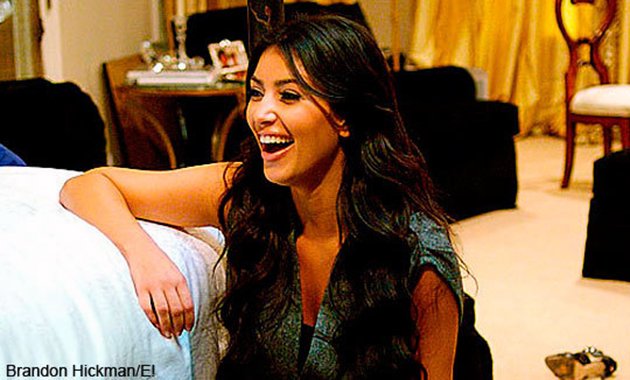 Searches soared as Kim broke up and then reconciled with NFL player Reggie Bush, gained and lost weight (with some help), and announced a perfume launch. Wealth and instant fame aside, her blog reveals her to be surprisingly accessible. As the tabloid queen says in one of the show’s earlier episodes, “There’s a lot of baggage that comes with us, but it’s like Louis Vuitton baggage. You always want it.” (No. 8, 2009 Yahoo! Year in Review)

The following year, the top-paid reality star was at the top of her game. Commenters hailed her as “humble” and a “humanitarian” when she rejected offers of a diamond-encrusted cake. (“Making a million dollar birthday cake is just ridiculous! I’d rather they give me a cupcake and donate the rest of the money to the homeless!”) She climbed to No. 4 in the search charts.

Bejeweled cake aside, she cemented herself in 2010 as America’s reality royal, along with her family, in “Keeping Up With the Kardashians.” Through good looks, breeding, and a can-do spirit that has launched perfumes, boutique stores, and a MasterCard, Kim has worked all her assets to get to the top. Devoted legions follow her on her blog, Twitter, and Facebook. And the chipper brunette stayed away from petty Hollywood-style sniping: Criticism, such as the sniffy fusillade from “Project Runway” host Tim Gunn, was heard but cheerfully disregarded. (And when that prepaid Kardashian Kard turned out to be predatory, she and her sisters Killed it.)

Being “ordinary” proved the welcome counternarrative to stories of celebrity talent wasted, such as those of Britney (on the mend) or Lindsay (still a mess). Kim had the right amount of privilege, compared with, say, Paris Hilton, who was spoiled by too much of it. And throughout the Kardashian mythology is the saving grace of sisterhood. (No. 4, 2010 Year in Review)

From Fairy Tale to Estrangement
In 2011, many would point to the 72-day marriage as the beginning of Kardashian’s public downfall, but missteps like the Kardashian Kard didn’t help. During the planning of her wedding, even supporters were uneasy at the scale of self-promotion and Wall Street-style excess. A poll, released two days before the ceremony, ranked Kardashian among the 10 least trustworthy personalities.

Still, the hitch seemingly went without a hitch, replete with diamonds ($15 million), flowers ($2 million), celebrity guests (nearly 400), cake (10 tiers and 6 feet high), cameras (E! aired the “Kim’s Fairytale Wedding: A Kardashian Event”), and a People magazine cover. All in all, much of the extravagance (reportedly $10 to $30 million) was actually subsidized by vendors cashing in on the publicity — and, later, notoriety.

A record 72 days later, the bride filed for divorce. People trained their online searches on “Kim Kardashian marriage problems,” “how much did Kim Kardashian’s wedding cost,” and “how much is Kim Kardashian worth.” (No. 3, Yahoo! Year in Review)

Then again, by the time she filed for divorce, she had more than 10,000,000 Twitter followers. And she needed that fan base to carry her through tough personal and public-relations times. The speed with which she rebounded with Kanye (whom she had known for years) from not-quite divorcee to expectant mama really split folks between the fans and haters. Both however, contributed to her click magnetism in 2012 as the most searched person on Yahoo!.

Kardashian is well aware of the passions that come from either side — especially those who malign her. “Yeah. I have no idea why,” she told the Guardian last September. “I work really hard – I have seven appointments tomorrow before 10am. I’m constantly on the go. I have a successful clothing line. A fragrance. I mean, acting and singing aren’t the only ways to be talented. It’s a skill to get people to really like you for you, instead of a character written for you by somebody else.”

[Related: Kim Kardashian Unusually Mum on Baby as Kris and Khloé Speak Out]

America’s Baby?
New mothers are cut some slack, but the public comes down hard if there’s a perception of any neglect (witness Britney Spears) or profiteering (witness Kris Jenner or Dina Lohan). Even Angelina Jolie was jeered for her adoptions, and more attention has been paid to the amount she and Brad Pitt scored for their kids’ shoots ($5 million and $14 million respecitvely), rather than to the fact that the money was donated to charities to help other children.

So far, new mom Kardashian has remained mum, keeping away from the social media fronts — and that in itself speaks volumes.

She’ll ultimately set the tone with those baby pictures. In that same “Access Hollywood” interview, Kardashian didn’t entirely rule out a photo shoot, “whether just for personal or [if] we choose to have it in a great magazine.” The Kardashian empire may not have pre-sold naming rights, but it have a history of deal-making its newcomers.

Father West, however, has been clear about setting boundaries. “I just don’t want to talk to America about my family. Like, this is my baby,” Kanye told the New York Times. “This isn’t America’s baby.” Let’s see if America’s reality princess agrees.