Don’t Blame the Turkey: The Truth Behind Tryptophan 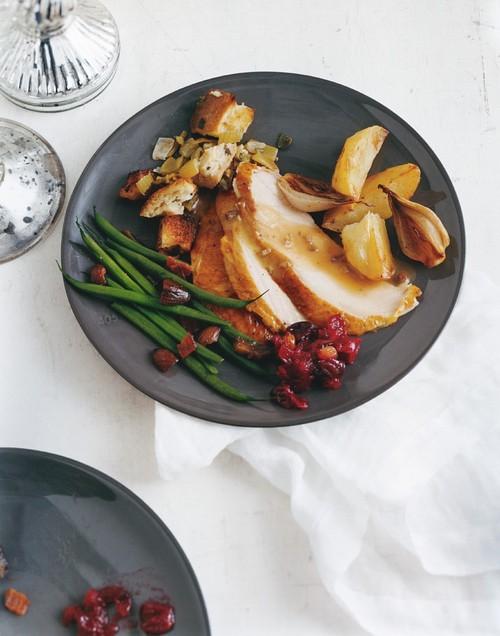 We’ve all heard of—or experienced—the post-Thanksgiving dinner food coma. You might have heard that it’s because of the tryptophan in turkey: tryptophan is an amino acid that helps produce serotonin, serotonin can make you more relaxed, and there you have it. Sleepy time.

Let’s back up bit before we assign blame to the turkey, though.

“In fact, turkey contains no more tryptophan than other poultry sources, such as chicken,” says Kimberly Sasso, a bariatric specialist at the Loyola Center for Metabolic Surgery. “Soybeans contain more tryptophan than turkey.” The highest source of tryptophan, according to the United States Department of Agriculture database, is sea lion kidney, and that certainly doesn’t grace many American dinner tables.

Still, turkey does contain the stuff. But the idea eating a lot of turkey zonks you out because of the tryptophan runs counter to the evidence, says Dr. Charles Mathias, an associate professor at the Neurobehavioral Research Laboratory and Clinic in Texas. ”The myth around Thanksgiving is really the opposite of these findings,” explains Mathias. First, it’s unusual to ingest that much tryptophan. And, “even with large intake of food at Thanksgiving,” he points out “tryptophan [levels] may go up, [but] so do five other large neutral amino acids (LNAA) that compete with tryptophan to cross into the brain.”

That’s when we enter the Tryptophan Paradox. These LNAAs are much better at getting to the brain, and they end up suppressing tryptophan levels there. So really, if you’re going to blame your post-Thanksgiving meal fatigue on anything, Mathias says it’s “the abnormally high calorie intake, possibly interacting with the social dynamics that occur in Thanksgiving gatherings.” In other words, gluttony and stress.

Well, here’s a twist courtesy of Dr. Craig Hudson, an Ontario-based psychiatrist, who researches natural solutions to insomnia. Hudson says that high-carb side dishes such as mashed potatoes and pumpkin pie trigger the release of insulin into the blood, and insulin suppresses amino acids—except tryptophan.

Eureka. So during that window of glut, tryptophan can get to the brain relatively unencumbered.

Not all carbs prompt insulin—just the ones that register high on those glycemic index charts. “If you have turkey and barley,” Hudson says, “that probably wouldn’t work.” But those sweet potatoes with marshmallows and toffee-caramel pudding with a scoop of nutmeg ice cream? Cue the insulin landslide.

So what if you want to avoid the food coma? Sasso recommends another paradox: Eat before you eat.

“As a dietitian, I recommend some simple tips on pacing Thanksgiving Day,” she advises. “Don’t skip breakfast! Or lunch for that matter, depending on when the holiday meal is taking place. You will more likely overeat and go into a ‘food coma’ if you arrive to Thanksgiving Day hungry.”

So the turkey doesn’t get off scot-free, but he’s hardly blameless.

More turkey talk:
How to Smoke a Turkey
How to Cook a Turkey in Half the Time
Should You Stop Stuffing Your Thanksgiving Turkey?

Have you experienced the tryptophan effect?