Get Fit With Fido, Flicka, and Flipper: How to Exercise With Animals 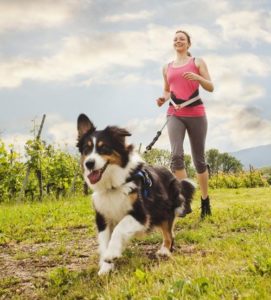 Summer doesn’t just allow you to escape the confines of the gym. You can pump up your outdoor-training with a cuddly partner: An animal. We already know that people who own pets are healthier — now a slew of companies are offering fitness classes with the animal kingdom, such as sunset horseback rides, dolphin swims, and more. Here are four classes to try.

Dogged determination. Dogs might be the most willing workout partners aside from your best (human) friend — especially since Fido won’t blow off a run to binge-watch “Orange Is The New Black.” In fact, a recent Michigan State University study found that people who walked their dogs were 34 percent more likely to meet federal benchmarks on physical activity and international research published in the Journal of Physical Activity & Health came to a similar conclusion.

“If dogs get into a routine of being walked, they will come to expect it each day and become a source of motivation for the owner,” co-author Kelly Evenson, a professor of epidemiology at the University of North Carolina, tells Yahoo Health.

But you don’t have to solely walk or run. Thank Dog! Bootcamp, a southern California-based company available in half a dozen states with plans to expand across the U.S., offers cardio, free-weight, and stretching classes with pets. While the humans go at it for 60 minutes, dogs take breaks every ten minutes. The company claims people can burn anywhere between 500 to 750 calories per class.

”All of our workouts are scalable,” Adinna Smith, a dog trainer who runs a bootcamp in North Carolina, tells Yahoo Health. That goes for the dogs too: They can be chihuahuas or 12-year-old Labrador retrievers, as long as they — and the owners — pass the initial consultation. (So yes, carrying around your teacup Yorkie counts as strength training.)

Plus, the boot camps put the focus on your pup so you’re not tempted to quit the workout. “It gets you out of your own head,” Smith says. Bonus: While the owners learn to give exercise commands, they in turn become more attuned to their dogs. “The bond that people develop with their pet during the process is amazing,” Smith says.

No Thank Dog! Bootcamp near you? The company’s app is the next best thing.

Swimming with fishes. Fitness programs around the world offer swims with sea creatures (seals in Scotland, sea lions in Cozumel, and turtles in Barbados). And in the U.S., Discovery Cove in Florida and Sea Life Park in Hawaii put you nose-to-rostrum with spinner dolphins. Although, SeaWorld spokesperson Nick Gollattscheck tells Yahoo Health, its swims are “more of a sensory and amazing experience rather than a ‘workout’ experience.”

There are also private companies that bring you where pods of wild dolphin frolic. “For example, here in Hawaii each morning, resident spinner dolphins come into special sheltered bays to rest after a night spent foraging,” dolphin expert Louis Herman, a psychology professor at the University of Hawaii and founder of The Dolphin Institute, a Honolulu nonprofit, tells Yahoo Health. While you can swim nearby, be respectful —these creatures are protected under the Marine Mammal Act of 1972, which bars harassment. “The important thing is to be a passive observer,” Herman advises. “Don’t chase the dolphins.”

Equine opportunities. Horseback riding can burn anywhere between 420 calories an hour (trot), to 528 (gallop). And for those who fear sitting so high off the ground, a little housekeeping may be more their speed: Grooming a horse burns an estimated 525 calories an hour and cleaning the stalls require almost as much effort as a gallop.

You can also visit a dude ranch, which will match a horse to your skill level. “You would probably go on a couple of short rides so you can get the feel of the horse,” Colleen Hodson, executive director of the Dude Ranchers Association, tells Yahoo Health. “Usually by the third or fourth day the guest is chomping at the bit (no pun intended) to go on half-day or all-day rides.”

It doesn’t take long to get in shape for horseback riding but it helps to be prepared. “Riding requires strong ankles, legs, abs, and arm muscles,” says Hodson. For example, multiple reps of this calf-strengthening exercise could help: Stand on one step, allowing your heels fall over the edge, then push up on the balls of your feet, then back down. You can also place an inflatable ball between your thighs and squeeze for 15 to 20 seconds at a time (a la Thighmaster) to build strong gripping muscles.

One hump or two? Sadly, camel racing ain’t what it used to be. For instance, the town of Benicia, Calif., which boarded U.S. Army camels for auction in the late 1800s, hosted annual races until 2008. And in the Middle East, the so-called sport of sheiks has mainly employed robot jockeys (replacing children) for close to a decade now.

Still, there are some places left in the world where a body can squeeze between humps, like the annual Virginia City International Camel & Ostrich Races, which takes place in September in Nevada. “Racing camels takes a lot of endurance, balance and ability,” Joe Hedrick, owner of Hedrick Exotic Animal Farm in Kansas, tells Yahoo Health. The bumpy and demanding ride — camels can move up to 40 miles an hour — suit folks who enjoy balance sports like waterskiing, snowboarding, or skateboarding.

One caveat: “You absolutely must be in good shape to race a camel,” says Hedrick, who can assess jockey potential in one minute. “It’s an athletic exercise just like riding a bucking horse or a bull.” And despite the camel’s reputation for being mean and irritable (which is why the U.S. Army experiment failed so miserably), “at least the camel won’t attack you like a bull might.”