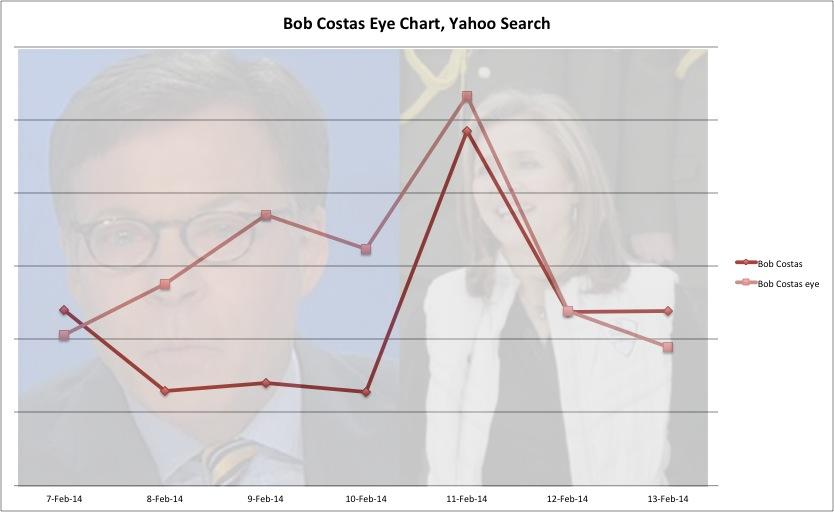 This February 14 search chart shows searches from the Internet giant for Bob Costas. The NBC sports anchor was sidelined from his Winter Olympics hosting duties by a viral infection, which caught online attention.

A case of persistent pink eye has given yet another boost to women equality: Bob Costas’ ocular affliction has taken him out of the Winter Games for the time being and Today correspondent Meredith Vieira as the first sole Olympics primetime anchor.

Nice timing with XXII, which finally debuted women’s ski jumping after 90 years of battles and outmoded medical theories involving tender uteri still expostulated by the likes of the International Ski Federation president as late as 2005.

Costas should be glad of the swap as well, since he said in the NBC press release that the last thing he wanted was “to go through the rest of [his] life owing Matt Lauer a bunch of favors.”

And while Search traffic has dropped off for his eye (because pretty much everyone knows what’s going on), there are lookups on Yahoo asking, “where is bob costas,” “what happened to bob costas at olympics,” and “how is bob costas” — making concern about the man finally surpass curiosity about his eye. Because he’s more than that. 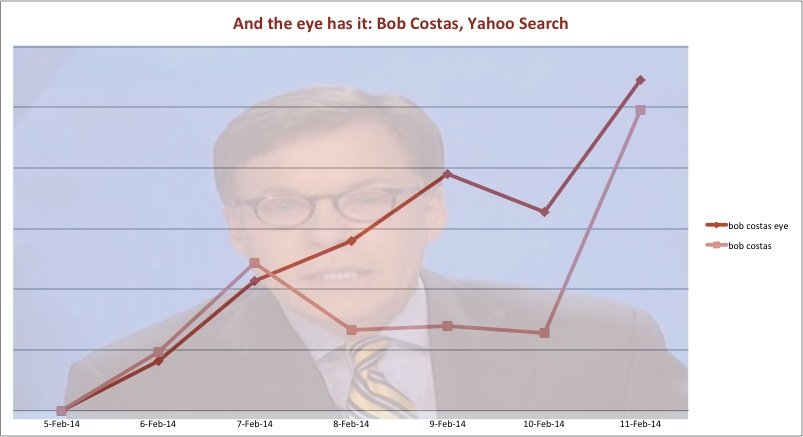 Conjunctivitis forced NBC announcer Bob Costas to take a break. His ailment, apparent from the first day of his …

After 157 Olympics broadcasts, Bob Costas rolled the chair over to Matt Lauer so he could treat his conjunctivitis away from the public glare. The substitution’s going into a third night.

Absence hasn’t lessened the online concern. In the past few days, searches on Yahoo for “bob costas’ eye” number more than all other Costas queries combined — which include “how tall is bob costas,” “bob costas hairpiece” and “bob costas plastic surgery.”

[Photos: 5 Russian Olympians who are models]

The sports anchor’s ailment is serving as a public service message of sorts: Searches for “pink eye” and “what is pink eye” have accelerated, as have those for “pink eye symptoms” (up 28% in the past seven days), “conjunctivitis (up 26%) and “home treatment for pink eye” (up 7%).

Other Hot on Ice posts