‘What Not to Wear’ Exclusive: First-Ever Behind-the-Scenes Clip 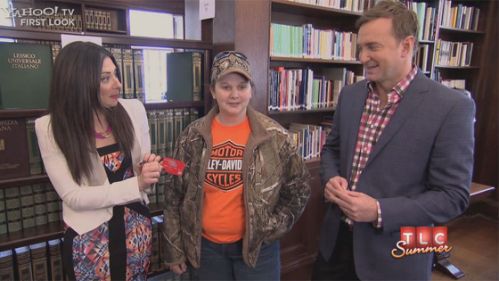 With only a few episodes remaining until the Oct. 18 series finale, “What Not to Wear” is opening the kimono — or in this case, the camouflage.

Hosts Clinton Kelly and Stacy London have handled their fair share of ornery women, so they’ve had plenty of opportunities to tout their ‘most difficult makeovers yet’ on their TLC reality show. But in this Friday’s episode, 22-year-old “camo-obsessed church custodian” Courtney — a Florida resident nominated by her grandma — reveals a kind of intransigence that’s almost vulnerable, played up even more when the cameras stay on behind the scenes.

That’s right: For the first and last time ever in 10 years, “WNTW” shows how producers and the cast interact with one another and their guest, from ambush to haircut to the final reveal (if they get that far).

[Related: A Fond Farewell to the Bloodsport of “What Not to Wear”]

For viewers, by the time a show gets to the air, there’s no suspense about whether the women will buy in — it’s more about backstory and how radical the Cinderella makeover will be. This time, “WNTW” fans can watch producers confer in hushed tones about how miserable “winning” a makeover turns out to be (“she’s pissed“) and witness Kelly and London doubting their powers of influence (“We’ve never experienced somebody quite like this,” Kelly says). Of course, all this just adds just one more layer of voyeurism that has delighted and moved fans.

By the way, if you want to turn the camera on yourself and deliver a final message to the “WNTW” hosts, TLC gives folks a chance on its farewell page.

Check out photos from “What Not to Wear”: