Will China’s Real Shangri-La Please Stand Up? Traveling to Paradise

Welcome to Shangri-La. Or, as the natives pronounce it, Shangorilla.

I’m on an air-conditioned bus with 20 other Americans and Canadians, ascending 11,000 feet above sea level past ghost cities, terraced farmlands, and haunting mountains in Yunnan province. Although many of China’s caravan routes have long been erased, we’re roughly following the thousand-year-old Tea Horse Road between southwest China and the Tibetan plateau — bound for a place called Shangri-La. 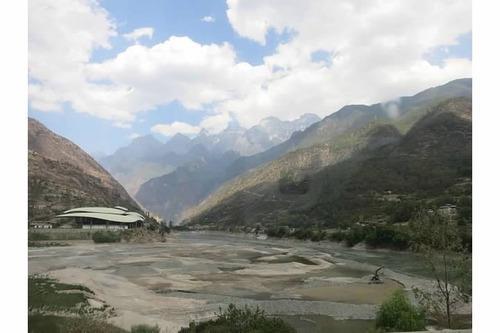 How southwestern China — and not Tibet — rebranded itself after a utopia made famous in a classic novel from 1933 smacks a little of Anglophile ploy meets Orientalist fantasy — and loads of politics. British author James Hilton, reportedly enraptured by botanist Joseph Rock’s account of the Tibetan and Naxi cultures, dreamed up a peaceful valley as removed as one could get from European lands brought low by World War I. Hilton never set foot in Asia, but his best-seller “Lost Horizon” added the term “Shangri-La” to the English dictionary, got the Frank Capra treatment in 1937, and inspired generations of marketers. (Even President Franklin Roosevelt gave the name USS Shangri La to the presidential retreat that Dwight Eisenhower would later rename Camp David.)

Shangri-La fever came from Xuan Ke, a musicologist of the Naxi ethnic minority whose father had worked with Joseph Rock (father and son were imprisoned during the Cultural Revolution for mixing with foreigners). When Xuan read “Lost Horizon” in the ’80s, he declared a resemblance to his hometowns of Deqin and Lijiang.

Related: A Meme Photo Made Me Take the World’s Scariest Hike in China 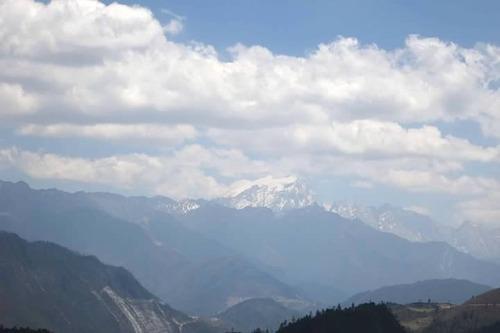 Deforestation (resulting in horrific floods) and the discovery of endangered snub-nosed monkeys had curtailed the logging industry: China needed a way to sustain this impoverished region. Officials latched on to Xuan’s tenuous Shangri-La connection, renaming the local airport Zhongdian Shangri-La Airport and launching plans for five-star hotels, much to the musicologist’s disgust.

The name change, plus glossy brochures and DVDs, boosted tourist numbers. A territorial squabble erupted over this branding gold mine. In 2002, Beijing renamed Zhongdian County (in northwest Yunnan) as Shangri-La County. It took another few years, but in a compromise typical of an area where 51 out of China’s 55 ethnic minorities live, several provinces and the Tibet Autonomous Region agreed to share the moniker Shangri-La across a huge swath of geography nearly the size of Switzerland.

A British novel might have inspired the rebranding, but not that many English speakers come here. It’s a haul, for one thing, with no direct flights from the U.S: Our tour has us fly to Beijing, then hop a three-hour-plus flight to Kunming (Yunnan’s capital). Among 1.5 million visitors, Westerners only account for around 10,000.

But China’s headlong eagerness to welcome travelers involves plastering the landscape with Westernized comforts to attract its rising middle class, many of them farmers who cashed in on their properties in the pent-up land grab. With the nouveau riche on the lookout for Tibetan chic, the horizon’s not going to remain lost for long.

The Mandarin pronunciation of Shangri-La is “Xiang-Ge-Li-La” — which can sound an awful lot like “Shangorilla” to American ears. Pronunciation aside, Shangri-La may have come from the Tibetan words for “Shang mountain pass,” the lost city of Shambhala, or the phrase Xiange ge (“inside the heart”).

Joining a tour means signing away your chance to wander off the beaten path into side villages and remote valleys. But if utopia is about appreciating life’s simpler pleasures, breathing Shangri-La’s rarefied air — which Hilton once wrote was as “clean as from another planet” — is a plus, especially in pollution-choked China. Here, the waters from mountains run reasonably clean, although potable water still comes in a bottle. 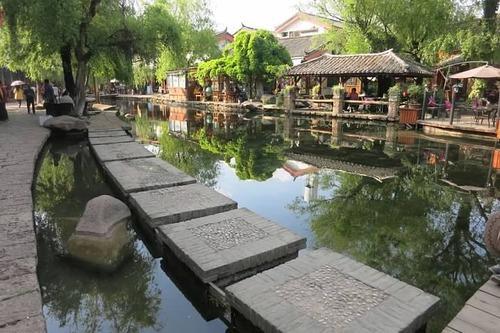 The ancient town of Lijiang, en route to Shangri-La.

The route we take from Kunming to Shangri-La passes astounding landmarks both geological (Stone Forest, Tiger Leaping Gorge, Lufeng Dinosaur Valley) and manmade (ancient towns of Dali, Shuhe, Baisha). Water flows from the snow-shrouded ridges of Meili Snow Mountain to fuel the Jinsha, Mekong, and Salween rivers. Tales of accursed expeditions that failed to ascend its peaks only add to the appeal.

Before we get to Shangri-La proper, there’s a curious stop on our itinerary — sharing yak-butter tea with a Tibetan family. The question about how they lucked out as ambassadors becomes apparent when we enter a construction zone. Only one house is ready in this replica of a Tibetan village. This will be like a Sturbridge Village or Polynesian Cultural Center, with a past still within memory’s reach and a long horseback ride away. 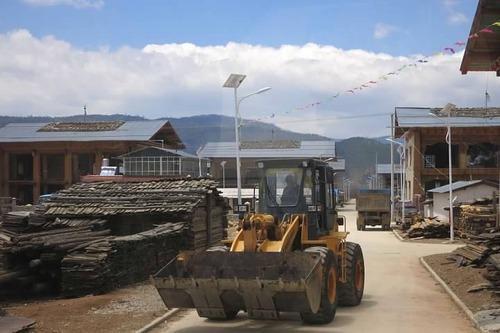 A Tibetan “village” under construction.

Manipulative? Yes. Then again, it’s weird to regret something I’ve never seen. I probably felt the same pangs that Americans did when railroads first rattled small towns, luxury hotels buried Waikiki, or Silicon Valley office parks bulldozed orchards. But it’s churlish to begrudge a nation bursting at the seams with opportunity for a higher standard of living. Tourism in western China has helped reduce the ranks of the poor from 57.3 million to 23.7 million in 10 years. And this Tibetan family is unfailingly gracious, wrapping us in silk khataks and cheerily accepting compliments. They don’t speak English, but they understand the sentiment. 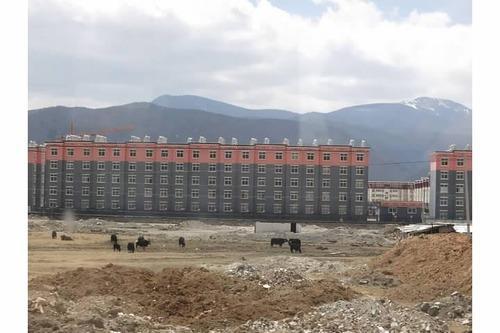 Yaks in the foreground of a massive building block

We leave the Tibetan town-in-progress and pass massive Buddhist schools, government buildings, and housing blocks on our way to Shangri-La County’s town center. Scaffold-flanked buildings rise from construction rubble. The population, which grew 30 percent in the last decade, recently cleared 100,000. The style is decidedly Western: if you want to attract millions of tourists, you don’t build two-story wooden houses and unleash the yaks — although a few still wander about. 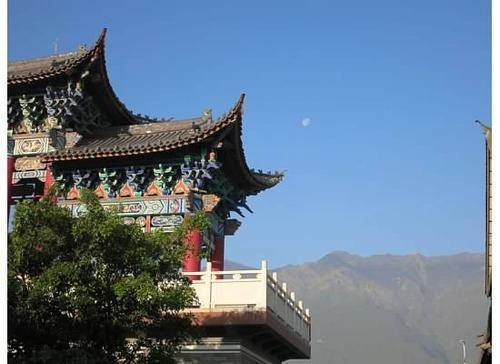 A traditional building in Shangri-La.

That goes for our four- and five-star hotels. The quirkiest is Dali N-Hotel, laid out like a Chinese courtyard with lovely buildings that have upturned eaves. In Shangri-La, the Nansai Linka Hotel is like many area boutique hotels: feather beds, Western plumbing, and crafted wood architecture that combines Chinese and Tibetan influences. There are also luxury hotels: The Mgallery Songtsam Retreat offers Tibetan-style decadence with Buddhist-temple views.

Related: Want to Be an Ambassador in China? Here’s How 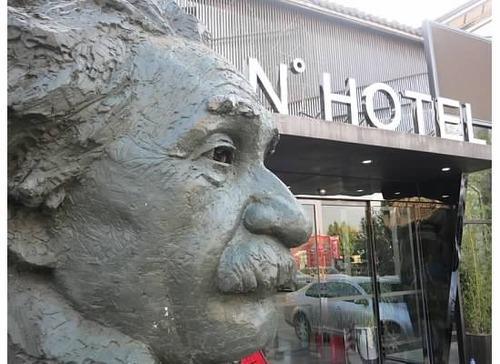 Beyond the town center, Shangri-La is distinguished by manmade landmarks. Among them are the recently renovated 330-year-old Songzanlin Lamasery (Yunnan’s largest Tibetan Buddhist monastery) and 1,300-year-old Dukezong. Dubbed the Town of Moonlight for the nightly reflection cast from its white clay walls, Dukezong was once the most preserved among China’s 147 Tibetan towns. From its geographic center, Turtle Hill, 1,084 buildings radiated out in a lotus shape, conforming to Tibetan Buddhist geometry.

Related: Haggling After Dark: The World’s Most Interesting Night Markets 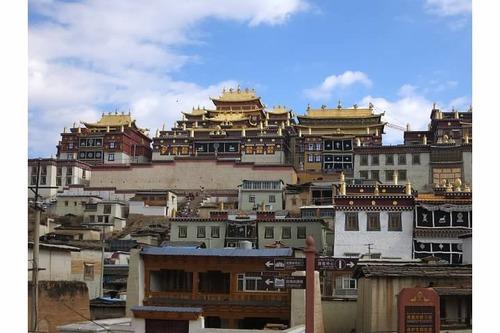 Not anymore. Over time, shops, cafés, and hotels were crammed into the gaps between buildings crafted of pine, cypress, and cedar. In January 2014, poor wiring at one inn reportedly set off a blaze that wiped out about 60 to 66 percent of the town. 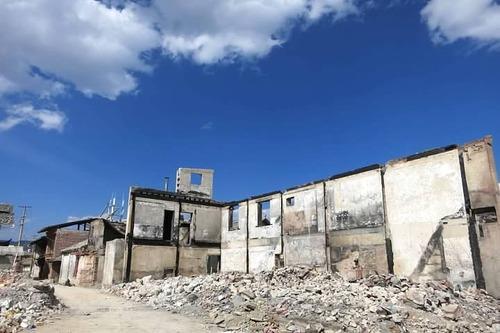 A fire-ravaged area of Shangri-La.

I read about the fire after booking the trip and wasn’t sure how much of Shangri-La would be left. Standing amid the ruins of the Tang Dynasty-era town, I see that the loss was spectacular. But what did Dukezong really lose? Many structures are new, blending into its Tang Dynasty-era surroundings. In three years, the estimated time to rebuild, visitors may not notice a bit of difference. And even more resorts are planned: LUX Resorts and Hotels is rolling out luxury boutique properties throughout southwest China to appeal to the “adventurous luxury traveller.”

But today, there’s still a sense of a miracle. Atop Turtle Hill — the lotus center — Guishan Dafo temple and a 60-ton prayer wheel rise gleaming and unscathed. 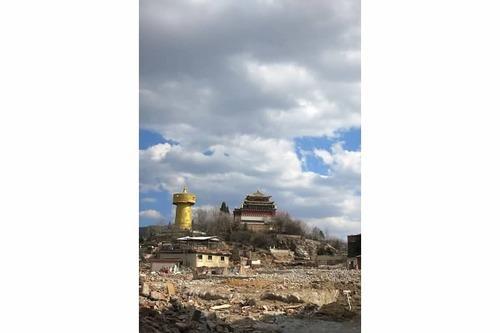 The prayer wheel and Guishan Dafo temple preside over the devastation in Dukezong.

The copper prayer wheel is by no means ancient: In restoring Dukezong a few years back, the government installed the world’s largest prayer wheel, one of those oversized cultural testaments along the lines of the Great Wall, the Forbidden City, and the Olympics Bird’s Nest stadium. Some call the icon an eyesore. I can’t help marvel at how the prayer wheel and temple survived in this land of warfare, poverty, earthquakes, politics, and commerce. 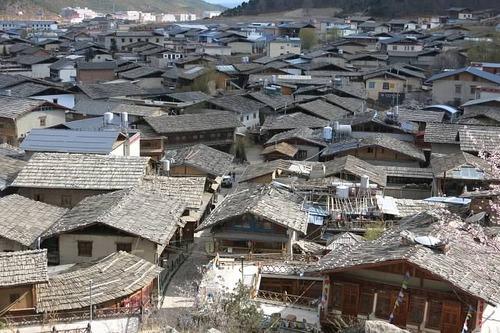 I walk up Guishan Temple’s steps to see what survives of Dukezong. The thrum of wind-whipped Tibetan prayer flags counterbalances the giggles and moans of tourists turning the prayer wheel, more often for photo ops than Tantric enlightenment. I try my hand, pulling the vermilion ropes clockwise to haul this karmic load. There’s weighty stuff to ponder when visiting a paradise like Shangri-La. 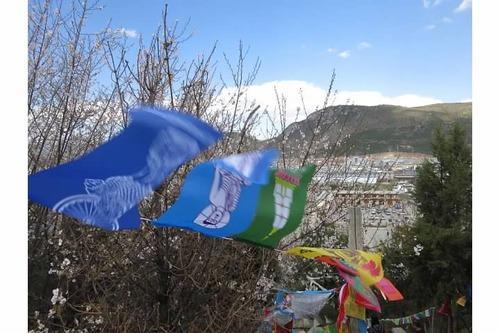 Prayer flags above the main square in Dukezong

The Details
Unless you speak Mandarin or have access to local guides, an organized tour provides the easiest entry into western China, though this can mean a trade off between ease and autonomy: Time “saved” will be spent at mandatory shopping stops. Look for deals from agencies like Sinorama, which bundles bundles Shangri-La outings with trips like a Yang-Tze River cruise.

If you decide to forgo a tour to strike out on your own, you can reach Diqing Shangri-La airport from Guangzhou or Shanghai. Major airports serve Kunming, where you can catch the rail or a bus. If you go by way of Nepal, be aware of very poor road conditions.

Earthquakes, like the one that struck Yunnan province in August, are common in the area — though the death toll usually results from the collapse of residential structures, rather than damage in commercial areas where travelers stay.

Some travelers may need to take the change in altitude slowly. Hotels and shops sell oxygen, but gradual acclimation may be the best solution.