What’s the bigger revelation for a certain geek generation of Gillian Anderson fans — that “The X-Files” was a career “aberration” or that she swings both ways?

Either way, Anderson has always been about broadening her horizons. The bisexual revelation comes in the latest issue of Out magazine and adds Anderson to the high-profile slate of celebrity bisexuals — but more on that later.

“I was in a relationship with a girl for a long time when I was in high school,” Anderson told the magazine, although the lesbian partnerships “have been the exception, not the rule.” The twice-married Anderson’s currently involved with Mark Griffiths, the father of their two sons Oscar and Felix (“Odd Couple” fans, rejoice). She also has a daughter, Piper Maru, from her first marriage with an assistant art director from “The X-Files.”

As for “The X-Files” aberration, Anderson didn’t get to do roles she really wanted to do until her nine-year stint with the Fox show was over. 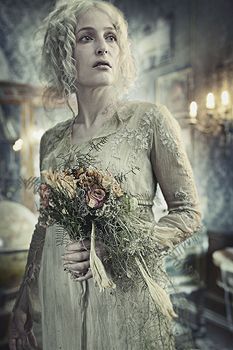 After the breakout success as FBI agent Dana Scully — a role she nearly didn’t get because she wasn’t perceived as sexy enough — Anderson went back to her formative English roots to take on award-winning classical roles, including “The House of Mirth,” “Bleak House,” and “Any Human Heart.” She returns to Dickens again as — ironically — the famously jilted Miss Havisham (pictured, right) in the miniseries “Great Expectations,” which airs April 1 and 8 on PBS.

Less casual are revelations from bisexual men — and those tend to be musicians (Billie Joe Armstrong, Pete Townshend, David Bowie), artists (Jean-Michel Basquiat), designers (Calvin Klein), or English actors (Alan Cummings) — sexual orientation is a more open topic in Europe than America. While there have been plenty of reports about Old Hollywood actors’ bisexuality, direct confirmation has been uncommon. Sexual preference after all still riles up controversy — witness the truncated One Million Moms protest against JC Penney after the retailer appointed gay talk show host (and CoverGirl) Ellen Degeneres as its spokesperson.

Orientation, by the numbers

Then again, the female-male ratio fits with the studies: More women then men are willing to identify as bisexual. Plus, one 2008 longitudinal study stated that over a 10-year period, “more women adopted bisexual/unlabeled identities than relinquished them.” (How much this is due to perceptions that it’s safer for females to identify as bisexual is undetermined.)

Overall, 3.15 percent of Americans identify as bi, compared to 2.5 percent as gay or lesbian. The San Francisco Human Rights Commission reported in 2011 that “self-identified bisexuals make up the largest single population within the LGBT community in the United States.” Its report, “Bisexual Invisibility,” noted that bisexuals get “erased in history” due to assumptions that bisexuality is a phase, terminology issues (what being bisexual means), and lumping them in gay and lesbian issues. Notes the study: “Thus any particular needs of bisexuals are eclipsed and conflated. Only a handful of studies separate out bisexuals and/or report on their bisexual-specific findings. Fewer compare bisexuals to people who are not bisexual.”

While the commission report points out the health and economic risks of bisexuality invisibility, the confession seems to carry an opposite cachet among celebrities. From Jillian Michaels, “The Biggest Loser” trainer and fitness empire maker, to Lady Gaga, sharing orientation hasn’t made much of a career difference, at least among the women. And if slideshows of the Coed magazine ilk are any evidence, bisexuality claims make them sexier — and of course, how men perceive bisexual women is a whole other issue.

In any case, 43-year-old Anderson finally felt it safe to share her past when she told Out, “You know, I’m old enough that I can talk about that [relationship].” The magazine, though, still noted a certain wariness in doing so: “It’s clear that Anderson doesn’t want to make more of her admission than it warrants, but it goes to the heart of the instincts that animate her life.”