The 100th anniversary of the Titanic expedition is under way. You can choose which moment you want to commemorate: The luxury liner left Belfast on April 2, 1912, sailed on its maiden — and final — voyage April 10, and hit the iceberg on April 15. The centenarian observation has spanned the globe, from memorial cruises to movie rereleases.

Tempting fate? The MS Balmoral’s Titanic Memorial Cruise follows the same course, sans iceberg. The ship set sail with the same number of passengers (1,309) and planned to rendezvous with the wreckage site on April 15 before heading to New York. Winds up to 45 mph, though, prevented the luxury cruiser from docking in Ireland. Winds aside, the conditions seem promising: A supermoon won’t be causing a hiccup this time … although global warming has been unleashing more rogue icebergs.

The ship is stocked with the descendants of survivors, including the grandson of the first steward and the only Titanic survivor relative to dive to the wreck.

“The seabed between the two parts of the ship is scattered with shoes. You begin to think they belonged to somebody. Those shoes were somebody’s possessions. It was very moving,” said [Philip] Littlejohn.

“It was something grandfather never spoke about. It had a tremendous effect on his life — it turned (his hair) completely white with shock,” Littlejohn said. (Montreal Gazette)

Encyclopedia Titanica compiles a list of survivors and links to their biographies.

What Titanic means, 100 years later. The shipwreck has always symbolized tragic glamour, and its 100th anniversary has inspired a ghoulish costume-party atmosphere, like the re-creation of the last meal that a Houston restaurant is offering for $12,000. Ultimately, 1,514 died in freezing waters. “Titanic” director James Cameron, who recently satisfied a seven-year obsession to solo-dive a record 35,576 feet, has become the go-to spokesperson of its cultural meaning: He was featured in the National Geographic documentary, solipsistically titled “Titanic: The Final Word With James Cameron.” Cameron zeroed in on the way this tragedy bundles hubris, class, and the mystery that the deep still holds for people.

It’s not about numbers. It’s about the hubris of the shipowners, for example; it’s about society at that time. It was a very optimistic time: Technology was advancing; people built aircrafts; they enjoyed electric light; everything looked like there would be a great future. And the Titanic stood for that. And then, suddenly, the unthinkable happened, as if all of this went down with the Titanic… [S]he is and will remain a metaphor. (April 6 interview with Der Spiegel) 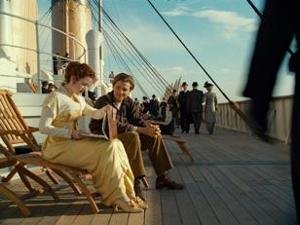 Obsession and embarrassment in stunning 3D: Among the many events surrounding the anniversary is the “Titanic 3D” release. The retinkered movie scored third in the domestic weekend box office, beaten by “Hunger Games” and — ouch — “American Reunion.” Oddly, the rerelease wins more favorable ratings from critics than from the audience. Then again, the cast’s embarrassment could be dampening the ardor:

No one’s heard a peep out of Leonardo DiCaprio (though Cameron relayed his sentiments after hosting a brief screening; the actor was “practically crawling under the seat”).

And as for Kate Winslet, the film’s heroine, the past 15 years have, apparently, been hell: she was “haunted” by “Titanic” jokes; bristled at her nude scene, “I’m not going to look” — (calling your bluff, Winslet) — and and wanted to vomit upon hearing Celine Dion’s ballad “My Heart Will Go On.” (That last one is fair.)

An even bigger sale is going on in Richmond, Virginia, on April 15, hosted by the company that found the Titanic wreck in the 1980s.

The biggest sale ever of Titanic relics is set to take place Wednesday in Richmond, Virginia, where more than 5,000 objects retrieved from the Atlantic Ocean seabed since the wreck’s discovery in 1985 are to be auctioned by Guernsey’s as a single collection — as ordered by a U.S. court — to preserve its historical integrity. (Post Media News)

If all these items prove too expensive for a souvenir, many cities are cashing in on the event by re-creating meals and hosting walking tours. Other ways to see the Titanic:

Exhibits. The RMS Titanic site lists exhibits from Atlanta to Singapore.
Others: 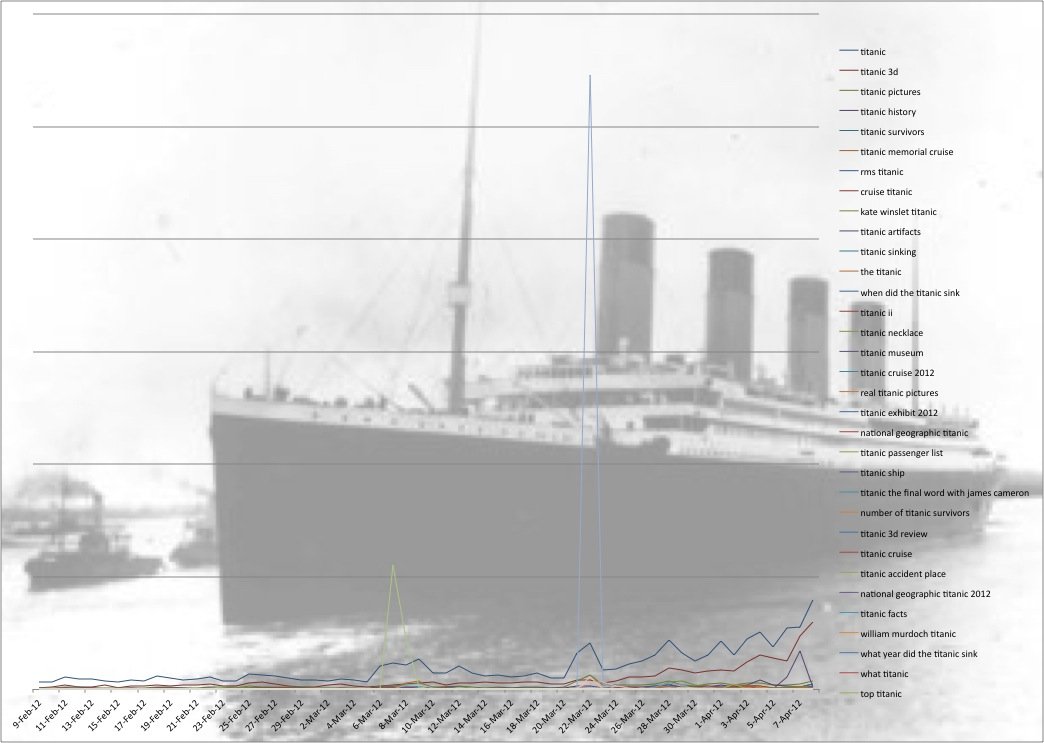