It took 15 months, more than 14,000 lives, and shots fired at United Nations monitors investigating a massacre before the U.N. called Syria’s conflict a civil war.

The acknowledgment came June 12 from the U.N. Under-Secretary-General for Peacekeeping Operations Herve Ladsous. Of course, unless the words “Syrian civil war” comes from the International Committee of the Red Cross, the Geneva Conventions don’t kick in—although ICRC has described the situation as “deteriorating sharply.”

For most observers, the death toll and the U.N.’s report of children being used as human shields already confirms Syria is, if not in civil war, has devolved into a kind of genocide. Of all the nations swept up in the Arab Spring, how did Syria’s crisis reach these proportions? And what is the truth behind the Houla massacre, which many call a turning point in the bloodshed? Some thinking on Syria:

A quick Syria history: Syria’s about the size of North Dakota, but with 30 times the population at 22 million. Bordered by Iraq, Turkey, Jordan, and Lebanon, the nation traces its history to Neolithic times. The area enjoyed wealth and prestige during the Roman era, before being devastated by Mongol invasions beginning in the 13th century. Later part of the Ottoman Empire for centuries, the country fell to France following World War I. Independence was gained in 1944, but coups defined modern governmental politics until 1970, when Baath Party leader Hafez al-Assad gained control and used brutal means to reinforce it, including the Hama massacre in which up to 45,000 people were killed or disappeared. His son Bashar al-Assad succeeded in 2000. 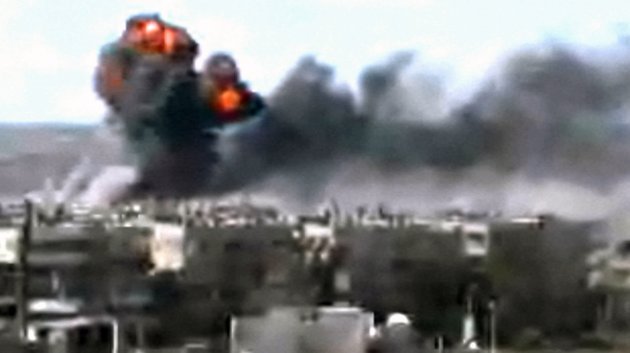 Arab Spring: For Westerners, Arab Spring seemingly erupted when a fruit-and-vegetable cart vendor immolated himself to protest corruption, and this act spawned bloody protests that upended entrenched regimes in Tunisia, Egypt, and Libya. Unlike other leaders, al-Assad, trained as an ophthalmologist, was supposed to be the reformist. He was certainly media-savvy, paired with a forward-looking, British-educated, glamorous wife who attracted magazine profiles. He used foreign investments that modernized Syria, but never lifted the state of emergency imposed in 1963. In March 2011, his cabinet resigned in the face of protests, and he suspended the state of emergency. Since then, however, brutality has reigned.

The Saddam Hussein party: Al-Assad belongs to the socialist Ba’ath party and minority Alawi sect. Andrew Tabler, author of “In the Lion’s Den: An Eyewitness Account of Washington’s Battle With Syria,” describes his regime as similar to Saddam Hussein’s.

[I]t’s the same kind of regime. In Iraq, you had the Sunnis, a minority in that country, using Ba’athism to rule over the majority Shia population and the Kurds, as well. In Syria, instead of Sunnis, you have Alawites, who are about 12 percent of the population, ruling over the majority Sunni population, which is about 75 percent.

…An Alawite is a heterodox offshoot of Shia Islam. The mainline Shia, like those in Iran and Hezbollah, are what they call twelvers, waiting for the 12th imam. Alawites are eleveners. They— it—they primarily come from the Syrian coast. They have been regarded by many Muslims, including Sunnis, as apostates and were treated horribly under Ottoman rule.

And so since the 1960s, when Hafez al-Assad finally came to power, Bashar al-Assad’s father, in 1970, they’ve run roughshod over Syria. And so that’s what makes the current insurgency, civil unarmed insurgency against the Assad regime, take on a very sectarian nature. You have Sunnis trying to displace an Alawite regime. (June 11, NPR)

The ghosts: Besides the military, the government has reportedly relied upon the shabiha, or “ghosts.” These plain-clothed paramilitary fighters—shaven heads, skin-tight black shirts, and camouflage pants—are Alawite gangs. Driving black Mercedes with tinted windows, they come in after an area has been shelled to pillage, kidnap, and kill.

Al-Qaeda in Syria: The presence of al-Qaeda fighters has complicated the conflict. They joined the rebels late last year, and their arrival partly accounted for the drop in violence in Iraq. They’ve been suspected of setting off suicide bombs, but Western nations dispute Assad’s claims that terrorists are entirely to blame for civilian killings. 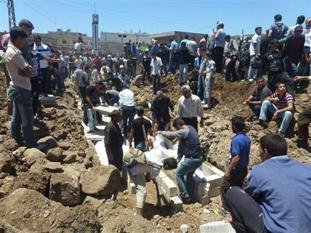 Houla massacre: Houla is a village in central Syria, mostly occupied by Sunnis and surrounded by villages occupied by the Alawaite sect. On May 25, about 108 people, including children, were slaughtered. The U.N. Security Council point to evidence of army shelling, and survivors describe the house-to-house killing by security men and shabiha. More than 60 victims came from a single extended family. The murders provoked Assad’s first public comments in five months:

Not even monsters would carry out (the crimes) that we have seen, especially the Houla massacre. … There are no Arabic or even human words to describe it.” (June 3, Reuters)

Russia’s foreign ministry supported a Syrian investigation that claimed the slaughter was done by rebels and mercenaries, and Russia ultimately blames all involved. One eyewitness—an air force officer on leave in Houla—is Major Jihad Raslan, who defected after the massacre. He said after the town was shelled, the shabiha came in cars and motorbikes to kill villagers.

“A lot of them were bald and many had beards,” he said. “Many wore white sports shoes and army pants. They were shouting: ‘Shabiha forever, for your eyes, Assad.’ It was very obvious who they were.

“We used to be told that armed groups killed people and the Free Syria Army burned down houses,” he said. “They lied to us. Now I saw what they did with my own eyes.” (June 2, The Observer)

“Look,” said Abu Jaffour, “the armed men came under the cover of shellfire from villages completely under regime control. They are Alawaite villages, 500 metres to 2km away from us. And they want the world to believe that hundreds from al-Qaida had taken refuge there. They are the terrorists and they will pay for this.” (May 27, The Guardian)