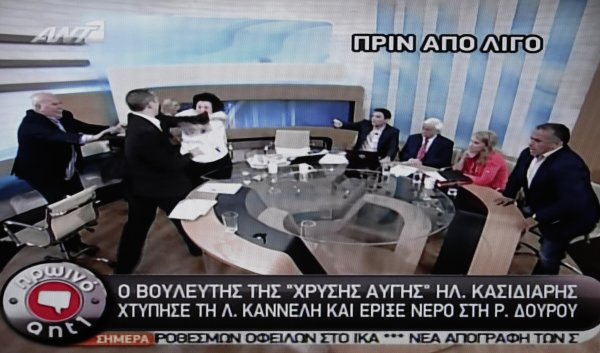 A slap may not damage, but it can wound.

Ilias Kasidiaris is the latest offender to buzz the Web, after the deputy of the Greek Golden Dawn party—described as neo-Nazi extremists—slapped a female political rival three times on a live political talk show.

In the case of a celebrity versus paparazzi, it’s often a question of defending privacy. In a political context, it can signal betrayal or a nation spiraling out of control. Even in an age of hair-pulling reality TV segments, cinematic violence, and trigger-happy headlines, a slap still has the power to shock.

A look at recent high-profile slaps: A female “supporter” hit Milwaukee mayor Tom Barrett when he was down, conceding Wisconsin’s gubernatorial race to Scott Walker. Oddly, she asked permission first, then ignored his preference to be hugged and slapped his cheek. Barrett declined to press charges against the woman, saying a day later, “That’s life in the big city.”

In the Sean Penn/Christian Bale scheme of paparazzi slapdowns, actor Will Smith’s slap was more a chiding backhanded shove. At a Moscow “Men in Black 3” premiere, a male Ukrainian reporter tried to plant a misdirected buss when they hugged it out. The reporter, Vitalii Sediuk, admitted he took his Slavic traditions too far.

Sharing his side of the story over the Moscow premiere incident, Sediuk dished, “I tried to kiss him on the cheek and he moved his face too fast, then it turned out as if I wanted to kiss him on the lips.” He went on to note, “Will Smith is a person who I deeply respect as an actor,” before adding, “When I met him in Moscow, I wanted to do something to impress him.” (May 24, AceShowbiz)

Kasidiaris’s motivations ultimately may have been personal: He lashed out after a criminal matter was brought up.

Mr. Kasidiaris threw the water at Ms. Dourou after she brought up his alleged involvement in an armed robbery in 2007. A court case on the robbery was yesterday adjourned to 11 June. (June 7, RTE)

But when he hit at his female political rival, he also struck right at a polarized Greece.

In a nation where physical violence is rare—and public displays of violence against women even rarer—Kasidiaris’s assault on Liana Kanelli and Rena Dourou, during a live TV debate of politicians representing the seven parties that won seats in the country’s inconclusive 6 May election, had clearly shocked Greeks. (June 8, The Guardian)

He and his party have claimed self-defense, and Kasidiaris remains in hiding. Meanwhile an angry public blames the police for failing to arrest him and protecting the Golden Dawn party.

[Related: Did the “Greek Slap” Mark a Turning Point in Euro Crisis?]

Political brawls: Physical confrontations are common in politics. Taiwan’s legislature was notorious for its dust-ups involving men and women, although in 2007, the Daily Mail broke it to the Western world that the brawls were staged.

Reports from the Taiwanese capital, Taipei, yesterday quoted legislators and political observers as admitting that the televised fights are staged acts, planned in advance to generate media attention and garner favour with voters who like to see their MPs fighting for all their worth on tough issues.

The brawls are so well planned, it is claimed, that MPs have even called up one another to ensure they wear sports shoes ahead of their choreographed clashes. And when it’s all over, after the pulled punches have been delivered and the broken chairs removed, they all get together for a merry drink. (May 17, 2007, The Daily Mail)

Perhaps to show how it’s truly done, South Korean lawmakers have had massive brouhahas that inspired roundups like The Mirror’s 2008 best ever political punch-ups from Nigeria to Russia (with Alabama representing the U.S.) and the New York Times’ 2009 “When Legislators Attack.” Here’s one notable episode caught on camera, when a younger legislator made the mistake of going after a judoka.

When a slap hurts more than a punch. The slap, though, can be more shocking than a fight. Its meaning digs deep into our cultural imagination: Jesus counseled to turn the other cheek in response to one. The gloved slap was a prelude to the duel in England (although most of the time, people just sent notices). General George C. Patton nearly derailed his career when he slapped two privates in 1943 for cowardice, not knowing one was ill with malaria.

Ultimately, the slap hinges on honor, says Elliott Gorn, a Brown University professor of American civilization and history and the author of “The Manly Art: Bare-Knuckle Prize Fighting in America. A punch may inflict more bruising, but the slap is “more intimate, in a peculiar way,” he says. “A slap doesn’t really do much damage. It’s about insulting someone and putting them in their place…Honor is always about hierarchy.” When a man slaps a woman, Korn points out, he’s “asserting his superiority. It’s a hierarchical gesture.”

For the female “supporter” slapping Barrett, she accused him of conceding a race before the voting had finished (anyone still in line can vote, even when polls close): As the recall representative, his premature announcement meant they all had lost face, so she was taking an aim at his. “The phrase about losing face,” Korn says, “the face is really that’s where the real self lies, anything that assaults that is an assault on who we are.”