What started as “Twilight”-inspired fan-fiction bondage erotica became an underground reading obsession and erupted into two separate bidding wars. The story of the “Fifty Shades” trilogy might be the most reported phenomenon that nobody—outside a certain age range and gender—has heard of. When the paperback version comes out Tuesday, April 3, though, expect long bookstore lines, a wave of sleep-deprived women, and a sudden demand for gray ties with strong tensile properties.

This may not be a passing fad: In the coming months, a movie trilogy will make “Fifty Shades” as omnipresent as “Twilight” or “The Hunger Games.” A sign of women’s power in the marketplace? But first, an excerpt:

Uncoiling from the floor, rising lazily, like a jungle cat, he points the end of the riding crop at my navel, leisurely circling it—tantalizing me. At the touch of the leather, I quiver and gasp.

From London to Down Under to the Upper East Side, a best-seller’s journey. A former TV executive in England longs to write a book. Under a pseudonym (E L James), the mom of two contributes some bondage-themed fan fiction, inspired by Stephenie Meyer’s “Twilight” series. (That trilogy, of course, was an homage itself to, respectively,”Pride and Prejudice,” “Romeo and Juliet,” and “Wuthering Heights.”) James’s works get picked up by an Australian publisher in May 2011.

The seething erotica burns its way across the Atlantic, and “Fifty Shades of Grey” becomes known as “The Book” among a New York cadre of Upper East Side moms. A 57-year-old woman from Massachusetts tells her mahjong group, “Oh my god, you have to read it.” (Yes, ladies still play mahjong.) By February, more than 100,000 copies (mostly e-books) are sold. The title hits the New York Times best-seller list by early February.

The New York Post is the first to devote some ink to the phenom:

It’s like “Twilight” for the grown-up set. Except, you know, with lots of sex instead of vampires and abstinence.

New York Times columnist Maureen O’Dowd even weighs in, and reminisces about bondage fantasies. And this is just the beginning.

The bidding wars: the publishers. Vintage Press, which publishes authors like Cormac McCarthy, Stieg Larsson, Haruki Murakami, and Toni Morrison, ultimately snagged world English publishing rights with an undisclosed seven-figure sum. The imprint released its e-book ($9.99) on March 12, and in quick succession will publish all three in paperback (the first April 3, the last two, “Fifty Shades Darker” and “Fifty Shades Freed” on April 17) under the “contemporary romance” genre. How does the literary heft of a fan-fiction author fit in? Publicity director Russell Perreault told Yahoo! that the press carries “the best of everything” from genres like science fiction, mystery, and drama. “It’s a great story and a great character,” explained Perreault, adding that his publisher, Anne Messitte, leaped on the book after hearing from friends and then attending an author reading.

The bidding wars: the producers. The Hollywood battle was just as fierce: The Hollywood Reporter recounted how agent Ari Emanuel—brother of former White House chief of staff and current Chicago mayor Rahm—risked rejecting a call from the president of the United States to take a meeting with author James.

A source says that during Emanuel’s chat with the president, he waxed enthusiastic about “Fifty Shades,” prompting Obama to say that the first lady had enjoyed the book.

But a source with close ties to the Obamas says the president was kidding and, no, Michelle has not read the steamy saga.

Ultimately, Universal Pictures and Focus Features—which released the female-friendly works of “Jane Eyre”—now boast development rights reportedly for nearly $5 million. No timeline yet as they focus on the first film, according to Universal Pictures. Bondage has gone mainstream (James Spader and Maggie Gyllenhaal in “Secretary“), but if the entire trilogy does make it to the big screen, it’d be a first for this racy genre. Just one erotica-bent film tailored to female audiences could be a first, even if you go back all the way to the Pre-Code era.

This bidding war and the timing of “The Hunger Games” making box-office history bring up the question: Are women back in favor in Hollywood? The surfeit of superheroes (come on, “Green Lantern” before “Wonder Woman”?) has been wearing thin, and stats showing female attendance at “Twilight” matching or exceeding male attendance at superhero blockbusters have been duly noted.

But will women go out in public to see their guilty pleasure onscreen? And how will  lines like these translate:

He’s naked except for those soft ripped jeans, top button casually undone. Jeez, he looks so freaking hot. My subconscious is frantically fanning herself, and my inner goddess is swaying and writhing to some primal carnal rhythm.

Melissa Silverstein, founder of Women and Hollywood, has mixed feelings about the “Fifty” frenzy. On one hand, she’s not keen on the subject matter in which the woman is the submissive in more ways than one. On the other, it’s good that Hollywood’s paying attention to what women are reading and talking about. “We have been deprived of our stories for so long, it’s like the sun peaked out,” Silverstein says. With the success of a more diverse slate (“Bridesmaid” being last year’s breakout), long-stalled female-oriented scripts are, at least anecdotally, are getting another look. “Something is happening here,” Silverstein says. “I would love for it to be a trend.”

Romance, erotica—what’s the difference, there’s sex, right? The plot entails a 21-year-old college grad named Anastasia Steele (shades of Anais Nin?) getting lurid with billionaire Christian Grey, who can only engage in sado-masochistic relations. (Yes, the surnames are Steele and Grey.) Author James stuck to the “contemporary romance” label when she spoke to Entertainment Weekly.

It’s a romantic fantasy story. That’s it. It’s just a fun read. I don’t see it as erotica. I see it as a contemporary romance. Yes, it’s quite graphic, but when people fall in love they have sex. Well, actually, they have a lot of sex. In the beginning. So that’s what this is about. It’s for ordinary women who like some spicy sex.

And now, a scene from the red room of pain.

A flogger… hmmm. I think I’m in shock. My subconscious has emigrated or been struck dumb or simply keeled over and expired. I am numb. I can observe and absorb but not articulate my feelings about all this, because I’m in shock. What is the appropriate response to finding out a potential lover is a complete freaky sadist or masochist?

The critics and the parody. Critics have singled out its heaving purple prose, the occasional misanthropy, and kind of an annoying heroine. Wrote one female blogger:

I found it to be melancholy and meandering, and the heroine narrator is so maudlin and wimpy I grew more and more irritated with her and with the story and had to stop.

In addition to completing the first draft, I’ve also spent the past two weeks fending off publishers.

At first it was easy to tell them to leave me alone. I’m an Artist. My Pure Vision will not be sullied by the dirty hands of commerce. Unfortunately, as the size of the McMansion that publishers dangled in front of me became progressively larger and more ridiculous, my Artistic Integrity slowly evaporated into the California sun…

What does 50 Shades mean? Usually used as metaphorical exaggeration to describe some grim winter skies, the phrase also implies complexity. Painters use 50 shades of gray to create optical illusions.

Why the tie on the cover? The tie’s a tool for BDSM—bondage, discipline, sadism, masochism. And now for one more excerpt:

Sometimes I wonder if there’s something wrong with me. Perhaps I’ve spent too long in the company of my literary romantic heroes, and consequently my ideals and expectations are far too high.

In the past 30 days, searches for “Fifty Shades” has heart-racingly pulsed up 1,485 percent—and 80 percent of those searches are fueled by females. Below, a more colorful map that shows the spread of “Fifty Shades.” 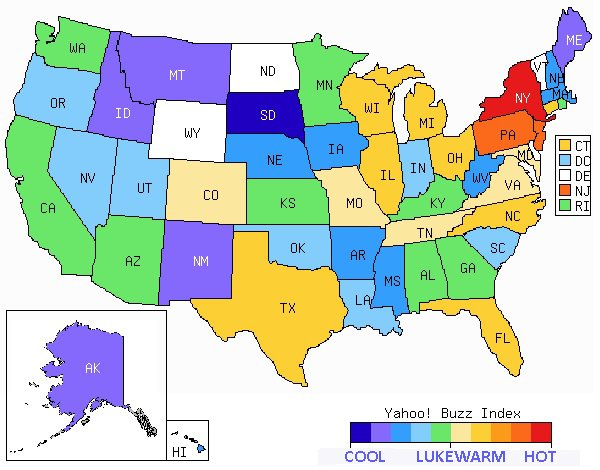