Kathryn Bigelow may have been denied a chance to repeat Academy Award history, but her film “Zero Dark Thirty”—which expanded to wide release on Friday—has made the best picture list for the Oscars, Golden Globes and multiple others.

The story about the 11-year hunt for Osama bin Laden also made hit lists of a different sort. On the day of its Dec. 19 premiere, Sens. Dianne Feinstein, D-Calif., John McCain, R-Ariz., and Carl Levin, D-Mich., sent aggrieved letters to the CIA and Sony Pictures objecting to the “clear implication” that intelligence derived from enhanced interrogations eventually led to bin Laden’s capture. Protesters from groups like Amnesty International turned out at the movie’s Washington, D.C., premiere to decry the film as a “Pentagon-sanctioned movie.” An Academy voter has urged fellow members not to cast a best picture vote for the film.

“Zero Dark Thirty”—the military term for half past midnight, the time Navy SEALs landed in bin Laden’s compound in Pakistan—has renewed questions about the government manhunt and torture. Tellingly, days before the senators made their public objection, the Senate Intelligence Committee (Feinstein is chair, McCain and Levin ex officio members) approved a study that “uncovered startling details about the CIA detention and interrogation program and raises critical questions about intelligence operations and oversight.”

That report, however, remains classified pending executive review (more details below). The war on terror has instead become a battle of dueling press releases.

The public relations battle
Few would disagree that the film’s first 45 minutes are brutal: The interrogation scenes depict agents waterboarding, beating and caging the suspected terrorist. Where critics—film and political—differ is if “Zero Dark Thirty” buys into the CIA narrative that crucial intel came from those particular tactics.

The senators certainly thought so:

As you know, the film depicts CIA officers repeatedly torturing detainees. The film then credits CIA detainees subjected to coercive interrogation techniques as providing critical lead information on the courier that led to the UBL compound. While this information is incorrect, it is consistent with public statements made by former Director of the CIA Counterterrorism Center, Jose Rodriguez, and former CIA Director Michael Hayden. (Dec. 19, 2012, senators’ letter to CIA acting director Michael Morell)

We are fans of many of your movies, and we understand the special role that movies play in our lives, but the fundamental problem is that people who see Zero Dark Thirty will believe that the events it portrays are facts. The film therefore has the potential to shape American public opinion in a disturbing and misleading manner. (Dec. 19, 2012, senators’ letter to Sony Pictures)

Bigelow and screenwriter Mark Boal have defended their storytelling as being more nuanced, stating the “film shows that no single method was necessarily responsible for solving the manhunt, nor can any single scene taken in isolation fairly capture the totality of efforts the film dramatizes.” As a self-described pacificist, Jessica Chastain—who plays CIA agent Maya—has asserted that “the torture in our film doesn’t work.”

The CIA, in a public posting to agency employees, said the “dramatization” left a “false impression”—although acting director Michael Morell’s suggestion “whether enhanced interrogation techniques were the only timely and effective way to obtain information … is a matter of debate that cannot and never will be definitively resolved” earned a second testy letter from the senators, who reiterated the request for details of all CIA interaction with the “Zero Dark Thirty” crew. (Aside from the chiding letter to Sony, there have been no plans to question the filmmakers.)

Despite reports of an investigating committee, no deadline has been set for the requests and no hearing is on the agenda. “Sen. Feinstein and the committee certainly expect to hear back in a timely manner,” Brian Weiss, communications director for Feinstein, noted in an email to Yahoo!. A spokesperson for McCain’s office downplayed the exchange. “These are the kinds of questions that can be pretty easily answered,” Brian Rogers tells Yahoo!. 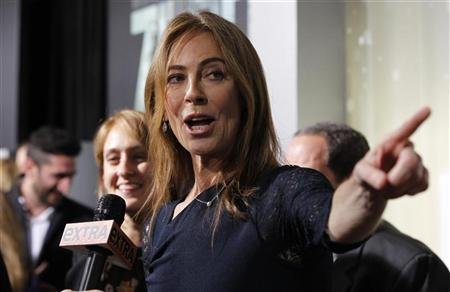 The truth behind the truth
Some answers, though, have been in the public record since May. Judicial Watch, a self-described conservative, nonpartisan educational foundation, posted emails and transcripts among the Department of Defense, the CIA and the filmmakers. Its interest in “Zero Dark Thirty” came about after a New York Times op-ed about the filmmakers’ “top-level access.” Judicial Watch had a lawsuit pending to request postmortem and burial photos and videos of bin Laden, president Tom Fitton said to Yahoo!; the foundation perceived the administration’s preferential treatment as “absolute hypocrisy.”

What’s not yet in the public record is the Study of the Central Intelligence Agency’s Detention and Interrogation, a 6,000-page analysis years in the making. However in April 2012, when former CIA Director Jose Rodriguez on “60 Minutes” expressed “no regrets” over enhanced interrogation techniques, the Senate Intelligence Committee detailed some findings—among them, a detainee revealed the identity of bin Laden’s courier (the crucial key in finding the al-Qaida leader) the day before being subject to “coercive interrogation techniques.”

Morris Davis, assistant professor at Howard University School of Law and former Guantanamo Bay chief prosecutor, recently wrote an editorial for Der Spiegel calling for the report’s publication as well as transparency in the ongoing Guantanamo trials. “As it stands now, the only information guaranteed to reach the public is the false account of torture in a Hollywood movie,” he wrote.

He fears that “Zero Dark Thirty” will establish the brutal techniques as the public record. “When I was in college, I remember ‘Jaws’ coming out, and that became the public perception of sharks, rightly or wrongly,” Davis tells Yahoo!. “The public shouldn’t have to guess at what the truth is.”

The issue may re-emerge in two very different political venues. “This has got to come up in the [John] Brennan confirmation hearings,” says Davis. Notably, before the controversy, acting director Morrell had been thought of as a solid candidate to lead the agency.

The other is Hollywood itself and the Oscars race. Bigelow had been considered an Oscar shoo-in for a best director nomination. At least one Academy’s member crusade against the movie’s best picture chances earned a statement from co-chair Amy Pascal: “Zero Dark Thirty does not advocate torture. To not include that part of history would have been irresponsible and inaccurate… This film should be judged  free of partisanship. To punish an Artist’s right of expression is abhorrent.  This community, more than any other, should know how reprehensible that is.”

At least that skirmish has an end date.

This article has been updated to include Sony’s statement.

Related: For more takes on the “Zero Dark Thirty” controversy, below Bigelow speaks to Letterman: