‘One Chance’: Paul Potts Versus Paul Potts (Plus the Art of Heavy Breathing)

Paul Potts’s Britain’s Got Talent audition from 2007 stands as one of the most memorable reality TV moments of all time. It inspired the movie One Chance, available exclusively on Yahoo Sept. 30 until its theater release Oct. 10. Watch the trailer:

James Corden, well-known in England as a comic stage and television actor, will be proving his singing prowess in the Christmas release of the Disney adaptation Into the Woods, co-starring Meryl Streep, Johnny Depp, and Emily Blunt. Singing Stephen Sondheim, however, is a little different than tackling Giacomo Puccini.

He admitted as much at the Toronto Film Festival world premiere of One Chance, which was helmed by The Devil Wears Prada director David Frankel and based on the underdog tale of Britain’s Got Talent Season 1 winner Paul Potts. “It was very, very straightforward,” he told reporters. “I would pretend to be singing opera, and then Paul would go into the studio and loop to my mouth. I hope I haven’t given it away too much, but that’s basically what happened.”

Not that Corden didn’t try. In a 2013 interview with Yahoo Movies UK, he explained, “There’s a big leap between singing… and singing opera. And I sort of thought I might be able to do it. So I had a load of lessons with a wonderful singing teacher in New York, which is where I was working at the time. And some of our producers came down to see me and to hear it.” 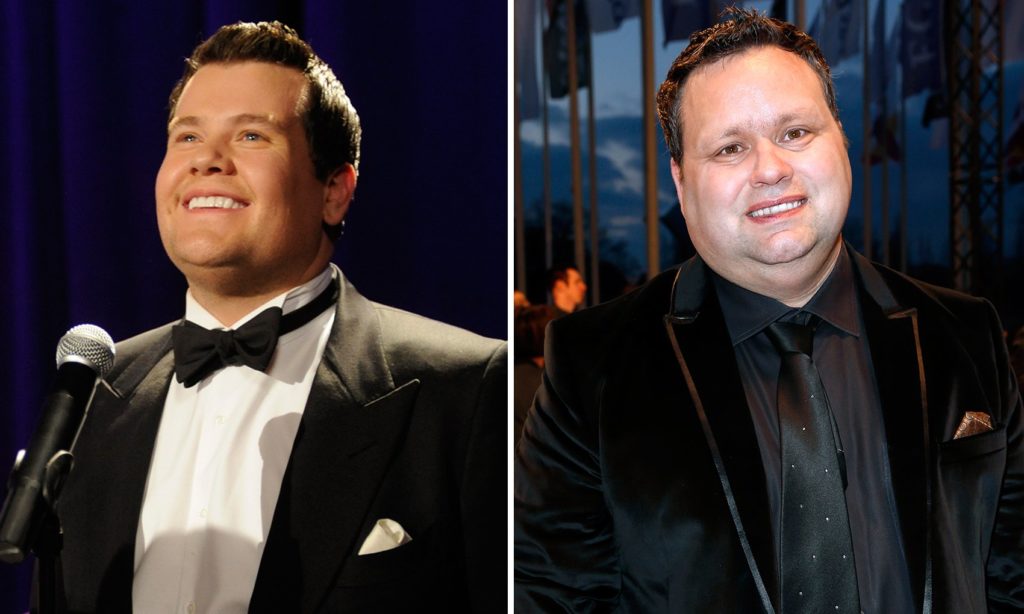 Then, in a twist appropriate for a biopic about a hard-luck guy, the filmmakers decided Corden’s voice couldn’t carry the real scene. “They listened to about half a song and went ‘Yeah no. This isn’t going to work. We should probably get someone else.'”

A comparison between the real audition and the film underscores the telltale signs of what operatic heavy lifting requires: Potts powers the song from deep within his diaphragm and lungs. Goes to show being a baritone is more than sharing a similar potbelly.

Not only did Potts have to dub for Corden, he also had to change the song to adapt to the actor’s breathing. “I had to marry my singing to the movements of his body and his mouth,” Potts told the Guardian in January. “The amount of power I put into it had to look convincing, so if he wasn’t using much physical power in his body, then I couldn’t use a lot of vocal power. I had to adapt, which made it very challenging.”

The film does splice Corden in to the actual Britain’s Got Talent segment, but it’s not a second-by-second duplication of that widely watched audition: The clip landed on YouTube’s top 100 most-viewed videos for a time (it has since dropped to the top 500). The movie intercuts reaction shots from family, friends, and longtime naysayers.

And while Corden captures Potts’s motions, there is a hangdog, tentative expression that Potts can’t quite shake, even when he hears the praise and applause meeting his spectacular performance. Failure is so second nature, Potts still looks tremulous, his head hanging to his right with the weight of rejection. Corden, befitting the comic take on Potts’s life, takes on a giddier frame — channeling the audience’s spirit in watching a monumental turning point in a man’s life.

By the way, the audition scene wasn’t the only that one Potts’s dubbed. “That bit where [Corden’s] running away from the bullies and there’s heavy breathing: that is actually my breathing. They asked me to heavy breathe,” he told The Guardian. “I had to just act like I was running and was out of breath. Not a phone booth type of heavy breathing. That would be the wrong kind of dark.”

Click here to watch the entire One Chance film.