The art of the protest. (Photo: Getty Images)

You think the Olympics had #SochiProblems? Welcome to #WorldCupPanic.

Military police on strike. Stadiums unfinished. A World Cup visitor brochure that advises visitors not to “fight, scream, or argue” when robbed. (That bit of wisdom’s from cops not on strike.) Now soccer icon Pelé worrying in the press that recent social protest will scare international visitors off.

Keep coming back every day for Yahoo Travel’s series on the #WorldCup, with guides to the host cities, advice on safety, and great tips and insider information you won’t find anywhere else.

Without doubt, Brazil ranks among the top bucket-list destinations with its carnival spirit, postmodern architecture and to-die-for beaches and jungle forests. But when the usually avuncular FIFA tartly points out the host country screwed up an unprecedented seven-year head start — then yes, it’s safe to say a mighty unflattering hash tag is looming.

Foot-dragging sprint
Of course, the handwringing looks awfully familiar. Isn’t this the usual foot-dragging/last-minute sprint that happens with all these mammoth sports undertakings? Things turned out fine with the Winter Games in Russia (although not so much with the Crimean peninsula takeover during the Paralympics), the 2010 World Cup in South Africa, and the 2010 Commonwealth Games in India. (OK, strike that last one: The corruption was so glaring and the sewage ran so freely, the Olympic committee briefly banned India from Sochi when the country elected the same bumbling secretary general to its Indian Olympic Association.)

Brazilians have downsized or shut down most of the promised projects in the hustle to finish the 12 stadiums. That means despite spending anywhere between $11 and $15 billion (South Africa spent $3 billion), everything from better airport food courts to actual trains won’t materialize in time. The irrepressible Pele made headlines in April when he commented about the “chaotic” conditions at the São Paulo airport. And while airport officials deliver a double-rainbow optimism that the lull in business travelers will balance out the incoming hordes (three million Brazilian tourists plus another 600,000 from abroad), expect some jet-lagged selfies from people stuck in marathon lines. 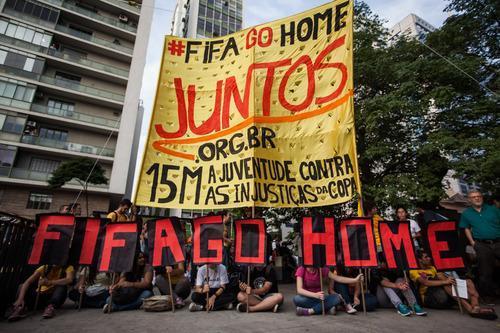 A mid-march protest in São Paulo criticizes the amount of money spent on the stadiums. (Photo: Getty Images)

Not that the country hasn’t been parceling out generous fix-it allowances. Still, by October 2013, only about two percent of the $3.3 billion budget towards airport infrastructure was spent. Sure, there have been Etsy-worthy moments of ingenuity — like the Fortaleza airport terminal made out of canvas — but that’s a whole otherworldly level of dysfunction when you can’t give away the money.

Seat of their pants
On the other hand, stadium managers haven’t been as shy about cashing in. For instance, at Arena de São Paulo (aka Arena Corinthians, aka Itaquerao), rumps will be settling on the most expensive opening-day seats since soccer accountants started tallying the numbers 26 years ago.

Even so, 11 of the 12 revamped stadiums couldn’t host test matches until April. Curitiba, long touted as Brazil’s most organized city, almost got cut loose last month from hosting duties. Brasilia found its Estadio Nacional — which came in 30 percent above estimates — had a leaky roof. Manaus ran out of food, which might’ve just as well since it didn’t have enough toilets.

At Arena Corinthians, a November crane collapse and a rush of worker deaths cast a dark pall. The crane was still stuck in the roof when FIFA officials did a January walk-through. Across all stadium construction, eight workers have died since October 2012. (The count though pales in comparison to reported death toll of 1,200 migrant workers so far in the buildup to Qatar’s 2022 World Cup.) 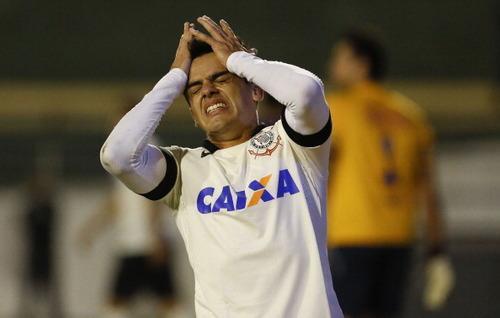 Strike that
The big spending and fiascos have done one thing: They launched the biggest protest party in a generation. The 1.5 million-strong rallies at last year’s Confederations Cup might be a warm-up exercise in anarchy: The so-called Black Bloc fringe groups have scheduled more protests three days straight starting June 13 — on Facebook, naturally. (Tip: Soaking your bandanna with vinegar will help you cope with tear gas fumes.)

They may be jostling with the police in Rio de Janeiro — but for space in the picket lines. The police have threatened to strike during the games because of spiraling crime rates, after the so-called policy of “pacification” — which involved clearing out about 1,000 favelas or shantytowns — cracked down on gangs but unleashed a bunch of criminal free agents.

(By the way, if you want to tell the difference between masked anarchists and the anti-riot police, the armed men in Darth Vader masks represent the law. The U.S. makers sold Rio authorities on masks literally inspired by the Star Wars villain, because they would “cause a psychological effect in the demonstrators or in other citizens.” Remember, this ain’t no cosplay, so no heavy breathing and making paternity claims like “I’m your father, Luke.”) 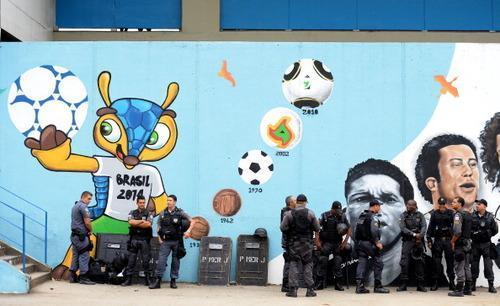 And the streets might get more crowded with some athletes talking about walking out over safety concerns. They have a point: About 100 São Paulo “fans” thought they’d show some tough love when they used wirecutters to break into the Corinthians’ training camp in February, then attacked the players and tried to strangle the striker. The players had to barricade themselves in a locker room until the police came.

You’d think with all this pressure, the players would be given carte blanche to blow off some steam. Not if Brazil coach Luiz Felipe Scolari has anything to do with it: His latest decree is to ban all acrobatic sex, even with their spouses. (“Normal sex” is fine.) Enforcement would come through “survey[ing] the players” — presumably checking for aerial rope and uneven bars.

Jogo bonito
No doubt when thousands cram tanned cheek to jowl in those stadiums, the jogo bonito (“beautiful game”) could eclipse the chaos. Plus, if forecasts for a $27.7-billion revenue come true, that might partly atone for the $13 billion price tag.

But after the last match in July, Brazil might want to think about getting back into panic mode for the 2016 Rio de Janeiro Olympics. After, of course, they settle that strike with 2,300 constructions workers. At least those guys got a head start. 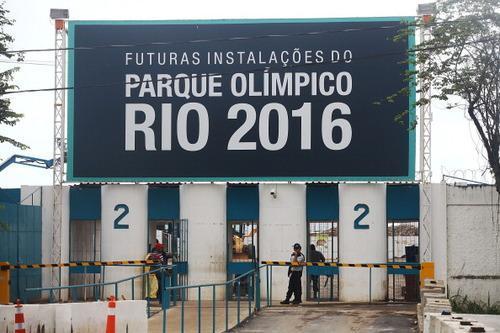